There is a something rather numbing, dissatisfying and disenchanting about supporting England. My overwhelmingly low expectations were thoroughly met, compliments of the Uruguayans; it’s like being on the wrong end of a ‘hospital ball’. The final whistle resulted in an en masse exodus of lads and girls from the pubs and clubs, while those who were missing out on normal social exchanges due to their partner’s extra-marital affair with football quickly reclaimed the remote. This all illustrates that football represents a massively social and personally meaningful experience for many of us. At the same time, few of us consider or are aware of the role that football can play in social change, health improvement and what the potential legacy of mega-sport event like this could be. 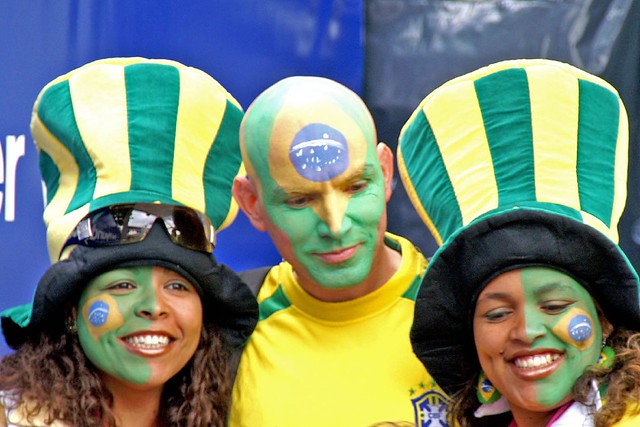 The frenzy, intensity and turmoil that we display in our following of football sits side-by-side the dissatisfaction of many Brazilians’ with the World Cup. Given that the tournament combines two known passions of the Brazilian people, football and celebration, many have been captivated in the emerging narrative of discontent and anger. Indeed, the pre-World-Cup groundswell of (social) media interest was primarily focused on the widespread protests of Brazilians. Their discontentment stems from a multitude of issues including (but not confined to) two key areas: corruption and lack of basic services, especially in health care and education.

This controversy runs counter to the growing narrative that mega-events bring positive advantages to the host country. Yet, there has been little discussion regarding the potential – or actual – positive health legacy of the World Cup. What is there to celebrate in Brazil’s health and education services that is attributable to the World Cup? More widely, what policy, knowledge and skill transfer was incorporated in the planning of this World Cup?

https://www.flickr.com/photos/120663298@N03/14397662776/in/photolist-nX8zX1-nWgMx7-nYjh12-nCsKJY-nXdgCg-nWvy3n-o2Y1h4/player/
There is also an emerging evidence-base that proposes that some lines of sponsorship generate a largely unacknowledged level of harm. Over the past few weeks, I have contributed to an emerging discourse that contests the influence and power of alcohol companies (i.e., the Budweiser Law) and their blatant disregard for the health of communities of fans. I have also been fortunate to celebrate the publication of a co-edited Special Issue on Football and Inclusivity, which addresses many of under-explored issues of the role of football in society. In another special issue we have seen the strong case for the benefits of football for health detailed. This included a co-edited article by Sepp Blatter (FIFA President), where much of his usual hyperbole was given a day-off. Similarly, The Lancet published an article on the developed and potential health legacy of Euro 2012. This research cumulatively evidences the real and tangible benefits of football for influencing a range of social issues, especially health. With this background, there must at least be hope that this World Cup can bequeath a degree of legacy.

My conclusion for this World Cup echoes my expectations for England’s performance; slim chances of success. Yet, I foster a real hope that the poor decision-making (by FIFA and their friends), and the global reaction to it, will drive a global movement for action and change. It is obviously important to change how host nations are awarded and supported to deliver effective World Cups and to ensure that such mega-events can capitalize on the potential health legacy benefits.

In the meantime, my opinion is that we don’t need a World Cup to capitalize on the day-to-day mega-event that is football. Football is in our back gardens and on our street; we play it with our children and with friends, it is played for fun or competition. We control all these events. So, in the spirit of offering a friendly challenge, let me challenge you. Take time to enjoy and play our game, making our own legacies, with the people we connect with and love.

…and as you do, look forward to what will certainly be a controversial build-up to the Olympic Games 2016 in Brazil.

View all posts by Daniel Parnell